May 2008
I am now the proud?? owner of a 1985 Pontiac Fiero 2M4, the engine has a broken timing belt so is pretty much done.  I went to the garage and paid the $500 plus $20 for the UVIP even though the seller is supposed to provide it.  You can’t see from the pictures but it is full of crap,  I guess in this case, the poor guy wasn’t intending to sell it before the engine blew so hadn’t tidied it up. 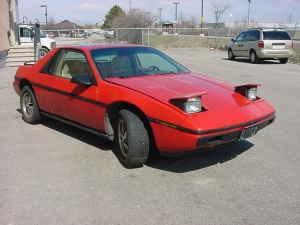 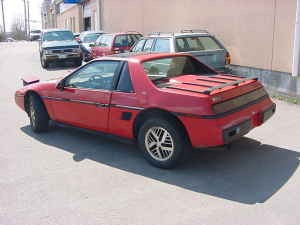 Called up the CAA and got the Fiero towed back to my place.  It cost $60 so I was pleased with that.

Ran up some debt on the credit card on vacation and decided that fixing the Fiero up was a crazy idea so I cleaned it out, took some pictures and listed it on Craigslist and Kijiji for ‘best offer’.
Got some offers ranging from $100 to $1000 for the Fiero but deleted the listings and replaced them with Talon listings, I’ll sell that instead.

Hooked up some jump leads to the Fiero and found that the radio, electric windows and dials all seem to work.  The headlights aren’t working and when the jump leads were removed the dials jumped so that it looks as though it’s going 30km/h with 1600rpm??

Started on removing the old 4 cylinder engine using the excellent guide here.  It’s for a V6 engine but it’s close enough.  Got to step 16, but I skipped step 2 and haven’t yet made a dolly for the engine.  The battery splash guard appears to be missing and the “fuel inlet and return line connectors” weren’t immediately obvious so I thought that would be a good place to stop.  I had a few extra wires running through the firewall as well, not sure what they’re for??

Got up to step 35 in the engine removal guide today. What a pleasure to work on, no seized nuts or broken bolts, hopefully the tap and die set I bought won’t get much use!!! Haven’t taken a picture of the progress since there’s not much to show yet, just a load of loose wires on top of the engine. I’m waiting to do the obligatory ‘jacked up Fiero with engine next to it’ shot.

Wow, the old Iron Duke is out!! Rick came over this morning and helped me push the Fiero into the garage, the wife even managed to steer it in without crashing! Then I set to finishing off the last few steps of the guide. The operation went smoothly so I took the engine and exhaust off the cradle as well. The exhaust was a real PITA because it seemed to be all one-piece and was wrapped all around the engine.

Now I’m committed to replacing the engine, so on with finding a new one …

After much searching on Craigslist and Kijiji, I found a 3800 engine out of a 1997 Pontiac Grand Prix GTP listed for $700 obo. It’s the Buick V6 3800 Series II L67 supercharged engine that I want and has the transmission and computer with it. It also comes with the transmission shift mechanism with the ‘Sport” mode selector but a pulley and belt are missing off the supercharger. I ended up picking it up for $600 but then paid $100 for a hoist so I could get it off the trailer when I got home! Hehehe

The 3800 L67 engine was listed by GM as having an output of 240 hp and 280 lb·ft of torque and the Pontiac Fiero has a curb weight of around 2750 lbs.  If the L67 doesn’t weigh much more than the old Iron Duke, those specs would put this combination very close to a Porsche Boxster as far as power to weight ratio goes.